Photo of LUXI by Samer Ghani

Biography::
Electronic artist LUXI has been refining her musical process for years, after having a natural interest in music from a young age and being raised in rural Wisconsin by her grandparents, she needed a creative outlet to process various emotions dealing with family estrangement and paved a path for herself in experimental music.

Refusing to adhere to the consumerist pop standards, she layers her experimental beats with raw vocals and emotional melodies, and uses music as a therapeutic tool, and as a means to connect with others. More recently, over the past few years LUXI has been creating computer based games and experiences that go along with her albums. Her discography spans over the past decade or so with 11 currently available albums and a handful of singles. 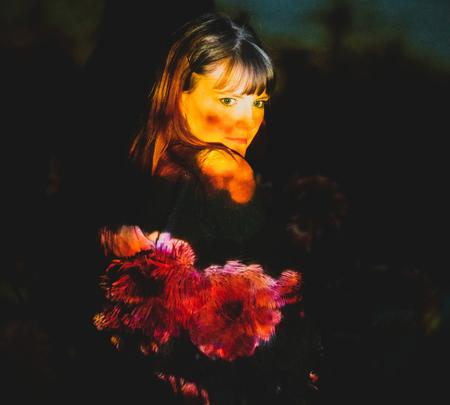 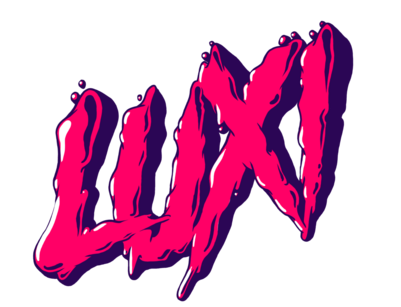 "LUXI has been gracing Milwaukee music venues with her brooding, whimsical electronica output since she—aka Alexandre Maxine Hill—released 2013’s W∆VES. That impressive debut gave way to a steady stream of atmospheric albums, ethereal EPs, and scintillating singles in five years that followed. The most notable output in LUXI’s rapidly-growing and ever-evolving catalog to this point is last year’s Geometric Universe. Though Hill claims the LP—which cracked the top 15 of our best Milwaukee albums list last year—is “a culmination of several months of evolution and discovery,” the music video for the record’s single was the result of a single-night shoot during a recent tour." -- Tyler Maas via Milwaukee Record (2018)

​"I selected LUXI for my piece, and fell in love with her music instantly. I would describe her sound as electronic/dance. I got to meet with her while she was creating new music for this work. The focus of Pull is how the dancers coexist and share a connection together onstage. I'm using nine dancers in my piece, and LUXI's music is really a driving force for the choreography. It's so grounded and textured." Nicole Teague-Howell on working with LUXI via Wisconsin Gazette (2018)

"It’s a great thing when different mediums of Milwaukee’s arts scene can come together to create great work. One of the latest examples of that was the MXE Milwaukee Mixed Show put on by the Milwaukee Ballet, which combined five artists and five choreographers for dance exhibits. Luxi was one of those selected to create a piece of music to go with the show, and out of that, we have a new EP, “All I Wanted” in the process. The project is one, fourteen-plus-minute track, featuring vocals from both Luxi and Old Earth. It definitely has a theatrical feel to it, and seems to be constantly evolving as the track progresses." -- Allen Halas via Breaking and Entering (2018)

"The prolific electronic artist broke out from the local underground scene with her mesmerizing 10th album, "Geometric Universe." The enigmatic, absorbing "Follow Me" is the standout, with Luxi's effectively thin vocals and sparse, bubbling beats expressing a rich range of emotion — vulnerability and icy resolve, cool confidence and haunting isolation — sometimes in a single moment." -- Piet Levy via Journal Sentinel "10 Best Songs by Milwaukee Artists in 2017"

"Featuring the neo soul-pop singer Lex Allen and the electronic artist LUXI, “The Darkness” is a dizzying dance ride that finds Perlick-Molinari highlighting his partners’ best impulses. Allen’s indomitable vocals and LUXI’s witch-house influences swirl together into an adrenaline-stoking trip through dark atmospherics arriving just in time for your Halloween-party playlists." --via IMPOSE Magazine (2017)

"On her follow-up Geometric Universe... Luxi is no longer downplaying her obvious songwriting chops. Bigger and bolder than its predecessor, yet even more openly emotional, it strikes an implausible balance between intimacy and spectacle, like an open mic performance punctuated with pyrotechnics. It’s one of the most engrossing electronic releases I’ve heard in years." -- Evan Rytlewski via Shepherd Express (2017)

"Producer LUXI has been releasing music on Bandcamp at a steady clip over the past few years. Her latest, Geometric Universe, is the best electro-pop album that’s come out of the city in a long time. The record feels like a dark maze, weaving an uncertain path that continually sends the listener into different directions. Perhaps most impressive, the album accomplishes the difficult task of remaining revealing and personal while also feeling dark and sinister." --Kevin Mueller via Milwaukee Magazine (2017)

"It’s a gripping electronic album that channels those late-night, post-bar-close parties where the morning sunrise devilishly peeks through the blinds. On “Every Night,” a murky electro-pop banger, the message is simple: “I wanna feel all the time/ So I stay up every night,” LUXI repeats.
The production infuses sheets of noise behind LUXI’s vocals, but while the sonic assault could easily act like an emotional blanket that protects against revealing too much, Geometric Universe is a surprisingly personal piece of work. “Feeling so happy even when I’m crying/ Cause I know I got you by my side,” goes the subterranean, shape-shifting track “Own World.” It’s this frank honesty throughout the album that makes Geometric Universe such a captivating and inviting listen." --Kevin Mueller via Milwaukee Magazine (2017)

"The prolific l u x i (Alexandre Maxine Hill) has branched out into plenty of pop and electronic offshoots over the course of at least eight albums and numerous singles and videos. Her latest LP, astral memories (p a r a d i s e), reins in her experimental tendencies in favor of a single-minded, minimalistic approach. Grimes is an obvious touchstone for Hill’s haunting, sparse beats and melodies, and her heavily treated vocals suggest the cryptic influence of vaporwave, although her lyrics are personal rather than satirical. Can slow, hypnotic synth-pop still be considered dance music? Why not." --Milwaukee Record Top 25 Albums of 2016